Cleopatra is one of the most popular slots from IGT. It is a 5-reel slot with 20 winlines and an Egyptian theme. Three scatter symbols launch free spins with tripled payouts, the highest winning combination (5 Cleopatra symbols) pays out 10000-times the line bet which is one of the highest possible wins per line ever.

For me, the greatest feature of the Cleopatra game is the fact that it allows very high bet on a single winline. Slots from other game providers allow you to decrease the number of lines, but you are not allowed to increase the bet per line accordingly. With Cleopatra, you can bet $100 on a single line hoping for extreme wins. This is the also the basic idea of my crazy Moonshot slot strategy.

I attribute the incredible popularity of the Cleopatra slot to the combination of a very popular theme, balanced math and hypnotizing sounds and voices. The game was truly one of the best slots at the time of its release to land based casinos. As popularity of slots from brick and mortar casinos often correlates with their popularity online, Cleopatra is also very popular in online casinos.

I was planning to reveal the math of this game for a long time. I mostly wanted to get accurate numbers for my Moonshot strategy, but I was also very curious about the volatility of this very popular game.

Cleopatra was surprisingly one of the easiest games to reconstruct. It has very short reels with many symbols, so none of the 3-symbol combinations repeat. The free spins use the same reels as the basic game and whole math is based exclusively on reels. There isn’t any random feature or parameter, probability of which I would have to guess.

With kind help of my colleague Rastislav and using my NASA-class secret algorithms, I was able to reveal the structure of Cleopatra’s reels in a relatively short time. Each of the 5 reels works as a loop, so after the last symbol, the sequence continues with the first symbol again. Here are the reels:

And here is the mapping of symbols to reel characters: 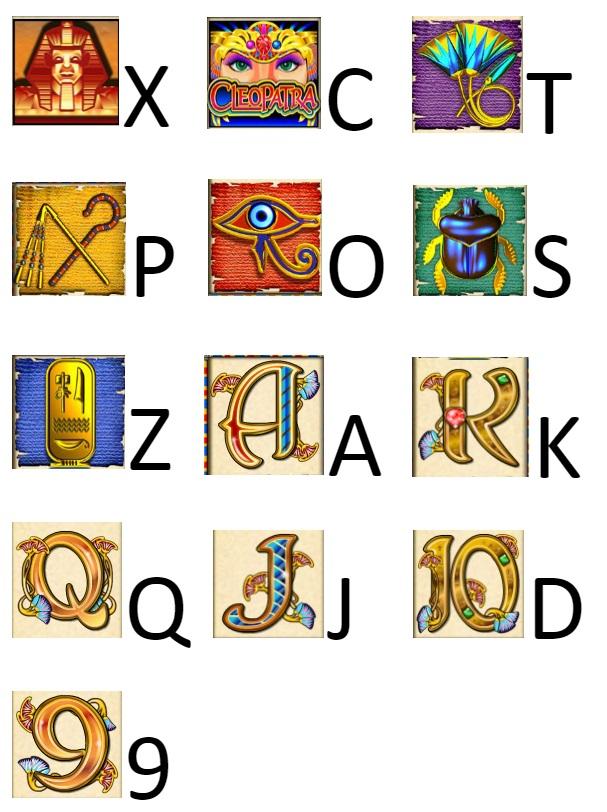 I have provided these symbols to my friend Mike (a.k.a Wizard of Odds). He has created this very good deconstruction of Cleopatra slot before I had time to finish this article. Mike did a great job analyzing the statistical probabilities of all the possible combinations. But I’m more fond of simulations so I decided to take a look on Cleopatra from my own perspective.

I ran 10 millions of rounds with 20 lines, 5 coins per line configuration:

The game hit at least one winning combination in 35.8% of rounds. That is a nice number which definitely keeps players tuned and prevents a feeling that the machine is "cold". Note that some of those wins are actually losses. If you spin for $1 and get back $0.50, you have actually lost $0.50. When counting just rounds with wins higher than $1 I ended up with 19.18% of winning rounds.

Interesting fact: the lowest possible win in 20-line Cleopatra (1 cent per line) is 4 coins. The smallest paying combination pays 2 coins but the 2 winning symbols are always hit by at least 2 winlines.

Putting this into a nice graph I got the following graphical representation:

Comparing Cleopatra to other games I managed to reverse-engineer, its volatility is on a medium level. There are more volatile games and you can’t hope for an enormous win in one spin in Cleaopatra. Let’s take a look how this changes if you switch to the 1-line mode.

I have switched my simulation to 1 line with a 1$ bet per line. This time I ran 100 millions of rounds, as the simulation with just 1 winline runs faster. The results were extremely different from those with 20 lines:


The game round ended with a win in 11.3% of spins. The minimal win was $2, or 2-times the bet. The maximal win was 10164-times the bet (5 Cleopatra symbols + some side winnings in the free spins) and my simulation hit this combination 6 times. That matches with the theoretical chance to get this combination in 1 round, which is one to 14.8 million.

The following chart compares the volatility of 20-line and single line Cleopatra. Almost 50% of the winnings’ volume is paid out in individual wins higher than 50-times the bet. The majority of lowest 20% is a result of scatter wins which are calculated as a multiple of the total bet and are not affected by the number of lines. With a little luck, players can expect to hit wins higher than 100-times the bet quite frequently. I mean quite frequently when compared to other less-volatile slots.

Cleopatra is a classic game with medium volatility when played as 20-line slot. But switch to 1 line and you’ll get an extremely volatile beast with reasonable chance for wins higher than 1000-times the bet. The feature which allows you to bet up to $200 on single line makes it one of the best all-in options in online casinos.

Casino Guru in other languages: Korean