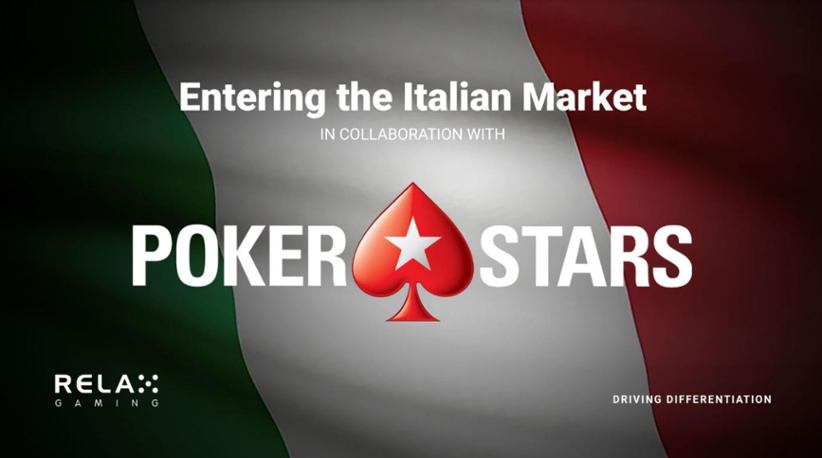 Relax Gaming is once again expanding its footprint in regulated markets, entering the highly-contested Italian market where the aggregator and supplier of award-winning iGaming content will roll out its product through a tie-up with PokerStars.

PokerStars will now have access to leading games and suppliers that have been certified to run in the market, significantly boosting Relax Gaming’s European footprint. The partnership is another important milestone for the aggregator platform which has put its European growth front and center in 2022.

As more markets are to be announced in the coming months, PokerStars will help Relax gain exposure, benefiting from its own standing in Italy. PokerStars is currently the third-largest iGaming operator in terms of consumer numbers. Moving forward, Italian casino aficionados will be able to explore player-favorite titles such as Money Train 2 and Temple Tumble.

The introduction of new game software will be rolled in gradually with PokerStars accessing 50 selected studio partners. The integrations of their product will happen with the aid of Relax’s own aggregation partners, to name Silver Bullet and Powered By Relax.

Relax is confident that this initial debut in Italy will be followed by further B2B opportunities for the company which has been expanding its market presence and reaches quickly. Relax’s chief regulatory officer, Alexia Smilovic Rønde, talked about the importance of this market entry and what it would bring to the company.

The key focus is establishing a footprint in regulated European iGaming markets. Even though Italy has been very strict towards the way iGaming and sports companies can operate in the country, there has been no withdrawal of interest in the iGaming interest. Rønde added about the opportunities this partnership enabled:

"With a competitive landscape that offers a wealth of opportunities for providers of premium gaming content such as us, I’m sure we’re going to see excellent results."

Relax Gaming’s chief commercial officer, Nadiya Attard, joined and said that teaming up with a B2C powerhouse such as PokerStars would only benefit the aggregator. Relax has managed to win 10 awards in 2021 as a testimony of its accomplished products and business model in the iGaming sector.

Presently, Relax feeds partners a list of over 3,000 online casino games with the numbers constantly increasing as new trusted studios join the aggregation and distribution platform. Relax Gaming also announced that it’s entering the Ontario iGaming market which launched in April. The company has been actively adding and crafting new slot games to distribute to its partners over the past months. Relax Gaming is once again listed as a nominee for the CasinoBeats Game Developer Awards 2022.