Stay up to date. Would you like to be notified about latest gambling news and updates?
Allow
Home Gambling Industry EveryMatrix enjoys strong second-quarter performance 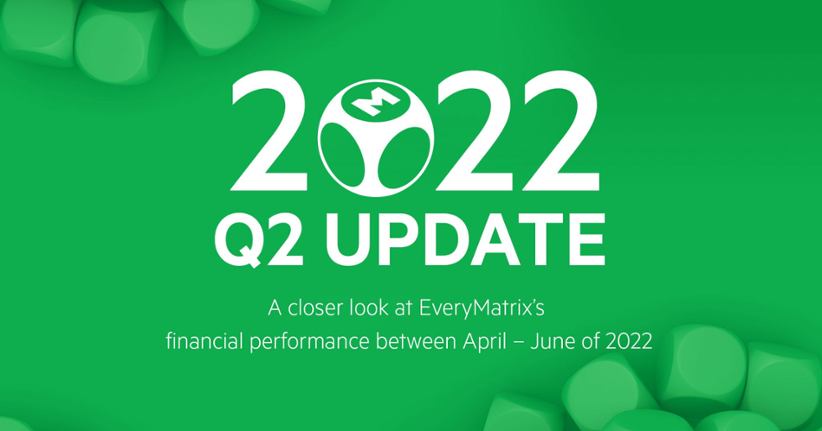 EveryMatrix has published its second-quarter results for 2022, demonstrating resilience and sustained growth across the board. Once again, the company’s results managed to outpace gross profit growth across all verticals, including Casino, Sports, and Platform. The results were also stronger compared to the same period last year, the report confirmed.

EBITDA stood at €5.2m ($5.2m), the company said. EveryMatrix confirmed that it’s committed to continuing and reinvesting its war chest in order to expand its reach and clout in the gambling industry.

The United States remains one of the essential focuses for the company as well. Retail sports betting supplier Leapbit, an asset that EveryMatrix acquired during the quarter, has helped boost those ambitions. Understandably, the quarterly results were welcomed by EveryMatrix Group CEO Ebbe Groes who said:

"Driven by our diverse product offering and strong client base, we saw yet another record number of new client wins in the quarter with 43 deals signed across all products."

Groes noted that the Group has been able to accumulate a 17% growth in gross profit, which is another strong performance that puts the company in a particularly strong place to continue pursuing its stated growth targets and strategic objectives.

Thanks to the Leapbit acquisition, EveryMatrix has a chance to strengthen the OddsMatrix platform, which already happened during the quarter. The chief executive noted that the OddsMatrix is one of the company’s main pillars and a pathway to future success.

In terms of milestones over the period, the company said that it had been able to reach 42 new deals signed in the quarter alone. The total deal value in 2021 was reached in only six months, and the company was happy to have been able to sign tier one operators such as 888casino, National Lottery of Malta, and BetMGM. Not only that, but the company saw its SlotMatrix solution launch with 54 new brands globally.

Overall, Groes remains confident that these partnerships are indicative of the status the company has obtained in the industry and its future prospects moving forward. Platform solutions, iGaming, and interactive wagering are all verticals in which EveryMatrix is thriving to this day, Groes noted.

The third quarter is already off to a good start with the company obtaining a license from AGCO to launch in Ontario.